Not the best scenery wise although it was good. I was FLYING CHOPPER FLYING (as Neville Bartos says in Chopper). I chose to take mainish routes and some bike paths and mix it up. I also thought of following a train track thinking that they go mainly though flat grounds as I wanted to hit Vienna today but if I didn’t that was ok too. It worked. Mainly flat but heaps of traffic – i won’t be doing that much but had a lot of space on the secondary roads so that was good. Lots of long downhills and short uphills but nice and flowing on a sunny day today – 27 again – PERFECT. One the downhills at some stage I was eating a few bugs and spitting them out on the hop just like Ace Ventura when he catches that bullet hahahaha. HUNGRY FELLA………….THERE YA GO!!! (from a different part but still relevant he he.

Sometimes it may seem as though I am passing through a lot of places but part of why I am doing this is to be on the open road and experience the scenery and towns along the way and fit in some sight seeing here and there. I feel happy with the progress of that status/combination at the moment **says to self**

I was ticking along and then wanted to stop for lunch and did so and went to a bakery and a supermarket (bakery for lunch and supermarket for dinner supplies). I hung around the town of Sopron for a little bit then was about to take off when I noticed a flatty – dang it Thor – well it’s not Thor’s fault – I did dress him he didn’t choose his outfit. So I spent two tubes on that as I pinched one of them so off comes the wheel again, off with the panniers, handlebar bag, water bottles bla bla bla – the tubes I have already have a few patches on them so I threw all three spares and looked for a bicycle shop. I looked for a person walking around with a good bike thinking that he would know where a good shop is – I WAS IN LUCK – he actually walked me to the shop and told me where he works if I have any more troubles – the kindness of strangers on this trip has astounded me and actually the friendships you forge on travels is uncanny – . He was telling me that he leaves for Afganistan tomorrow for the army – He told me where but if I tell you I have to kill you. Anyway – got three more spare inners and some more lube (for thor you idiot…although…) and off I went. I got to the 80km mark and something happened – Something clicked and my body was feeling great…my sore knee went away and my back probs disappeared – I saw some cyclists up ahead and thought ok lets kick it. So i upped my speed and was sitting on around 30ish. I was on a flat and some tailwind but I was feeling great. I caught up to the guys going on there daily ride and asked if I could sit on their wheel for a while (slipstreaming helps so much) and they looked at me and were saying I was SUPER and TOUGH AND COOL hahahaha all Swedish/English words hahha…They said no problem. One dropped back and I slipped in as a third – it was on – from my 80 – 100 km mark we were absolutely FLYING – They were testing me I know it cos one guy yelled SCHNELL SCHNELL hahaha and the pace picked up more than what they were on previously. Not in my sick state of mind that I was in right there and then were they gonna break from me – my pistons were going strong (although a re-bore and re-ringing is necessary). There is some times as a cyclists that you get in this state of mind and everything just clicks and today was one of them. I was heavy breathing but my heart rate remained steady.  They upped their speed and we were sitting on 40 for ages – here’s me with my panniers flying along hahaha I was smiling the whole way. For about 20km we averaged 38 and then they turned off but before they did we talked a bit and they showed me the quicker way to Vienna and threw me a protein bar – top blokes – a bit of competition doesn’t hurt anyone does it hahahaha – (I have a small vid attached of the speeds we were doing on the flats) Sorry about quality – this won’t happen again for a long time so I took advantage of it because normally I sit on 17 and that’s a push most times.

Sorry to share this information with you but since you’re reading this and are half interested in my blogs you will get the warts and all isn’t it? One of the best things in the morning is when you’re almost ready to take off and then something starts rattling inside- YESSSS I have to go to the toilet – it’s like emptying one of my panniers on Thor– you feel lighter and faster bwahahahaha.

6 hrs riding and almost 2hrs of down time (I take my time during breaks to soak it all up – that’s how the km I do are possible when I do them that is) I stretch a lot (and look like an idiot doing it) but it’s important – drink coffee – sit down in the shade – have a powernap – walk around – fix flatties – tinker with bike – whatever…..

Found a Euro Velo route sign when I hit Austria (first one found ever so far) so i’ll check that out on my way through Austria and take some photos of what they look like for the tourers reading this.

So I decided to camp on the outskirts of Vienna and not the one near the lake (tourists season has finished today so that’s good) and it worked – there is hardly anyone here and cheap camping, wifi, showers etc etc and close to town – i’ll spend a day housekeeping (and washing my socks) and another one being a tourist then it’s off to umm I think Brno (Czech)

Dinner tonight – a large can of three bean mix, Mayo, Sandwiches, fruit, protein bar, biscuits, coffee, choc milk – what a mix – you do NOT want to be in my tent tonight

Thanks for reading everyone – it’s great to see so many people doing so – Helps me a lot. 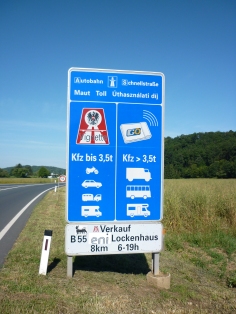 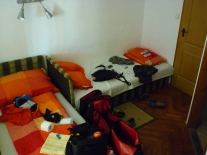 My Pension (Hotel) for the night 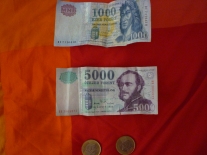 Hungarian Money – about 278 Forints to a Euro

The beard after a few days – time to shave or go rastaman???