Posted on September 7, 2012 by Vanderpants

As you can see by my averages in the last two days – they’re pretty…well….average. A lot of hills just a little bit larger than rolling and headwinds like you wouldn’t believe. I’m even pedalling on big downhills and that tells you something. My morning started out a little like yesterday – DRAMA. It was 5:30am and I heard some raindrops on my tent – that will wake you up quicksmart – especially when you haven’t put your rainproof outer layer on because you liked the breeze. Ok – so up i got (8 degrees C says my thermometer) and I packed up in record time and was outta there in 25 minutes – So on goes the wet weather gear and pouring with rain – so much fun at 6am in the morning. I cycled up hill for about 25 minutes when I realised I left my sunglasses hanging on the tree – IDIOT!!! I was really contemplating leaving them but I really like them so back I go – in the rain. I decided to stop at the bus stop to properly pack my gear as it was all rushed and hanging off anything I could find on the bike – I didn’t think anyone would use the bus stop at 6am in this town of 5 ppl – sure enough – two people on crutches along grunting at me – ok…patience Adrian patience – so I collect ALLLLLL my things off the seat – begrudgingly tear myself away from the shelter and into the rain with all my gear hanging off the bike – 20 minute ride to find shelter and sort my gear out – OK I’m set now – at least i’m dry that’s ok – OK lets start the day now – find water and breakky…….that was found 2 hours later and boy oh boy did I much that down. I ate enough to feed a small family with some coffee of course (this one was a probably 6/10 – best in Czech so far)

So my day started like that and pretty much rained most of the day but I was singing in the rain and sweating up those hills again. I am taking some of that Greenways route I was talking about earlier – it said that there are some steep parts – they obviously mean steep for people without any touring gear because I swear my pedals were going to snap off and many swear words were left on the top of those hills again. Either I am not fit enough, or I am really ready for a day off and sleep in, or the Greenways route is not really for touring with a loaded bike. That said though, It is really lovely to cycle through that region. I managed to get on the freeway by accident for 5km or so and OH MY GOD I was flying and really wanted to stay on there but I was getting beeped at and I turned off as soon as I could – the minute you turn off anywhere off the highway/freeway – HILLLLLLLLLLLLLLLS!!!!

I made it to Ostrava and I really wanted a day off, a sleep in and a shower. That was found over a coffee in the city and am now sitting near my hotel in a restaurant after a looong bath, my first steak in a month, a full belly, a sleep in awaiting me and a mental reset preparing for the next few days on the road – Can’t wait.

Ps Robby – re the crops – Corn, corn, ummm more corn, apple trees, grapes, little bit of Canola – that’s all I see in every country I’ve been to so far – the rolling hills are normally the wine regions and the corn fields are in between the villages on flats.

I can’t remember if I said this or not (I do talk a lot of crapola and can’t remember it all) But I think I am going to skip the big cities from now UNLESS theres something I really want to see or it ties in nicely with a couple days rest…I am noticing that I am gravitated towards them but really – whenever i’m in them, it’s busy, the roads are narrow, the bicycle paths are mostly so bumpy and you can’t ride on them,  it’s noisy, more expensive, the food is different than the little towns and I get frustrated. I am totally enjoying passing through the small towns, talking my normal crappy banter to locals, eating strange food, sleeping in the weird places and just riding the whole day experiencing the landscapes and sweating it out – The sleeping bit I haven’t mastered yet but having said that – I will go through some major cities still but mainly try to keep away I think. **tells to self again and again

I’ll start with the morning…goi ng from yesterdays efforts I felt as though it was going to be much the same…I put on my happy hat and off I went.  After 2 KM I got some glass in my tyre – no probs = panniers off, wheel off, new tube in, pump it up – BANG!!  It was either a defect tube or i pinched it…ok – panniers off – new tube in – tighten wheel up again – now the wheel isn’t straight – beginners mistake red – nice one! – panniers off, readjust wheel – panniers on again – Man this took like 45minutes – it takes more than that to break me Chzech Republic….anyway – so after that it was really smooth sailing for the whole day – I was in a different mindset and back to my headbanging to metal music state – bopping up and down standing on the pedals – through country sides, awesome little towns…it was a really great day I was flying. I have noticed though that things take so long on the road – a photo here, a small break there, a chat, an hour on the bike before the next break – the day goes before you know it – and when you hit big cities you can even half that again for navigation and stop lights etc  – but it’s part of it and I am experiencing it all. At lunch time I stopped in this really nice town called Prerov – A massive castle from the 1200’s was in the middle and in ruins but the outer shell of it was still in tact and it had all new houses in it – really nice but at lunch time I heard something go on loudspeakers throughout the whole town and then a massive siren – after asking someone they were practicing for air raids – nice to know.

After leaving Prerov – I was exiting the town and took a cycle path to go through this bridge alongside a truck that was on the road – it really didn’t look like he was going to make it regarding the height and we were right next to each other – I was at his height because the path rose a little and I shouted STOP!!!! – he heard me but all too late – BANG!!! His hydraulic thingo smashed the top of the bridge and made an all mighty noise….he reversed all the way up the road (insert pic below) and I think he damaged his machine on top of the truck but the bridge came off best he he. The day flew and I was in my 80th k (when I say flew – the day did and I didn’t – headwinds and hills AGAIN)  and thought it’s time to eat and sleep – I went off the road a little and found a camping spot in the woods but really, in hindsight – it was too close to one of the side roads and I thought so after setting everything up but thought no one would care as I was so far in the sticks it wasn’t funny – obviously someone did care – and a third thought was that I have highly reflective panniers – stupid **slaps head** so any car going past would reflect that like it’s sun shining outside – Anyway – this man stopped and reversed and shone his light on me – I was thinking ‘Here we go’ –  He said something in Czech I didn’t understand – I tried to say I am only staying here for the night and will leave early but I didn’t understand him and vice versa and I just ‘ok I go’ and drove off – Sorry Sir – I didn’t know you own THE WHOLE of the Czech forest – my misunderstanding he he. So off I went – another 100 metres deeper into the forest. There’s no way I am going to pack everything up and drive in the night 20km (over an hour) to the next town  – so I just picked up my tent and gear and just headed deeper into the woods – SOLVED!!!

Im now on my laptop in the deep dark woods and I hear hopping mice all around me and owls hooting – I did pee around my bicycle like Bear Grylls to claim my territory so to speak – see if that works – I have read in some bicycle journals that mice and the like sniff out food like you can’t imagine so I left my panniers on my bike off the ground – hopefully they know my pee = THE BOSS – KEEP OUT…Forrest noises all around me and stars in the sky – A GOOD FEELING!!!!!

And  now is now – Looking forward to another day and getting closer to Krakow- One more thing – I really feel myself getting stronger both mentally and physically – the tests in patience and the hills, weather and just being out and exposed to nature for hours every day are making me healthy in both sense of the words – it’s a great feeling

Sorry not many photos – raining most of the day today 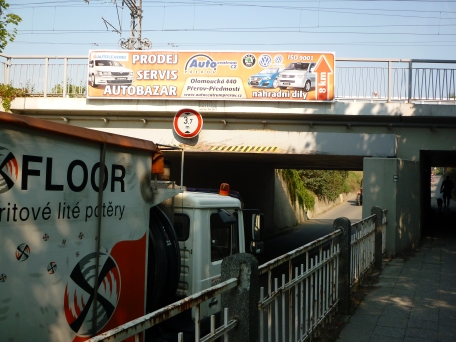 The truck that hit the bridge….IDIOT!!!!

Had to get Angry bird in there (Mr Redman)

Just thought this was nice – along route yesterday

The home for the night 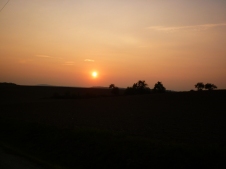 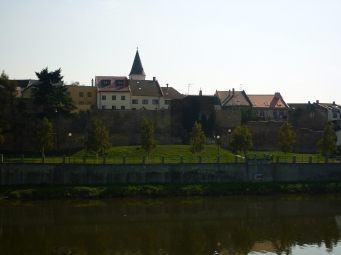 Castle in Prerov from 13th Centrury