Leaving Auschwitz was strange. I watched two documentaries the tour guide recommended to me which i watched that night. I was camping directly opposite the concentration camp and watching these sitting on the grass, pitch black – it was surreal. A lovely Dutch couple I spoke to for a while earlier in the day (the only other people camping there) cooked me a lovely meal and just gave it to me – some meat and potatoes – perfect – carbs and protein – exactly what I need – I was so grateful and happy not to cook – how nice was that – thank you if you are reading this blog – the little things as I always say. It’s time for me to start repaying the favours I get – gives you good travellers luck I think. Anyway – whilst watching these documentaries – a little hedgehog came running right past me – literally 5cm away – that was cool

Today was, apart from a few very small climbs, awesome and a walk in the park. I wanted to head to Krakow to see the old Jewish part of the city and also Oscar Schindler’s factory and even more importantly – too meet a friend I met in Italy. That will be tomorrow night.

I felt great today – on the climbs (small but sweaty work) I was pumping up them at 15kmph (normally it’s 8-10). I felt energetic today and the back was feeling great and my legs were like pistons on an Audi – no wait – like pistons on a Volvo – no wait – hmmmmm  pistons on a Honda – yeah that’s right – Honda – the comfy brand – not the fastest but reliable and comfy haha in motorcycles and cars. YUP…that was me. I was humming along and soaking it all up again. The only thing was that I chose roads that I thought would be countryside and quiet but after changing roads a few times I couldn’t get away from trucks (even road trains) on a single lane road with no sizeable space to cycle on the side. Sometimes I was forced off the road. The cycle paths are non existent here and if they are – you can’t go on them with a loaded bike unless you prefer to do 5kmph. For some reason there was no tonnage signs for trucks on any road so they just went everywhere – never seen anything like it – everyone was really good though and gave me space and in return I hopped off the road when it was possible.

I was doing some reading a couple days ago about cycling in Krakow and someone called it an ‘extreme sport’ ha ha – that would be close to the mark – the city sometimes feels as though it’s not even walkable – just for trains and cars. You really need to keep your eyes further ahead than right in front and your ears listening intently in the back.  Having said that though..this place is alive, vibrant, full of coffee shops, culture, history, cafes and history going way back. It’s beautiful. Busy as anything but nevertheless it’s wicked here.

I’m in a hostel right in between the old Jewish part and the new part of the city (good planning Red). It’s called the Cinema Hostel because they think they themed it so in every room – Sorry but hanging a few posters here and there doesn’t make that happen – Hope i’m not in the Brokeback Mountain Room…..The hostel had nowhere for my bike so I was about to leave as there is no way I’m leaving my bike outside. So the receptionist kindly suggested that she could leave it behind her at the reception desk – it’s 24hrs there so that was great – a small tip came her way (the tip was me saying ‘be good to your mother’)

After checking in I showered and walked around the old and the new part of the city for about three hours – totally amazing place to walk through. I ate dinner in this Jewish restaurant and I thought the prices were in Euros but it was Zloty – it was crazy cheap prices and looked really nice. I had the best entree ever – I simply walked in and said –’ I would like an entree and a main with a beer please’ and let him suggest whatever he wants (took a while but thought it was easier than asking what’s this or that) – there’s no way i’m going to understand anything he said so no point in asking about anything hahaha – I was in luck though – he came out with a wicked salad that I had no idea what was in it but something special (if you get my drift) – and then the entree was a cabbage roll that was out of this world – the main was beef with an onion sauce – totally wicked meal and it tasted home cooked – perfect – so in total I had two large beers, entree, main, salad ($10aud) – this place rocks. I’d hate to be my sleeping bag tonight – it’s going to lose a few inner layers with all that cabbage that’s for sure.

My hostel is pretty ummm what’s a nice way to put – pretty shit. Who cares though right – i won’t be there 80% of the time anyway. The staff are friendly – in their so called shop (a shelf) they had toothpaste for sale and that’s it HAH!.

On my way today I was looking for a post office to post my books back home and I stopped a nice old man who couldn’t speak a word of English so I had to use my acting skills – i totally laughed at myself after – I asked in Polish where the post office was………….no luck…………then I just said ‘Poczta’ (post) – still no luck so this is the bit where my years of media classes in high school paid off. Superior acting skills came into play ladies and gentlemen…..I took my books out…..used my arms as wings and pretended I was a plane and then said the word ‘Australia’ – HAH……you know what – it worked – he directed me and I found it – ahhhhh the little things hey.

Note: For some reason most shops in any country i’ve been too don’t cover bread or fruit and there are wasps and bees landing on it and making nests in it – so weird – grosses me out – end of fact.

I’ve learned that you can get lost with internet forums and opinions for hours on end – If i listened to half the opinions on most of the websites I would’ve been to, I would’ve missed out on so much. Some people complain about the smallest things and when I get there – the place looks perfect and the staff are friendly and everything you need is there – end of second fact.

Riding past some shops in the small towns in Poland you really have to look twice sometimes – what looks like a house that no one lives in is actually a really nice deli or coffee shop – you can right past and not even know.

Ok I think that’s it for now

This is the Redman signing off and trying to keep the rubberside down yo. 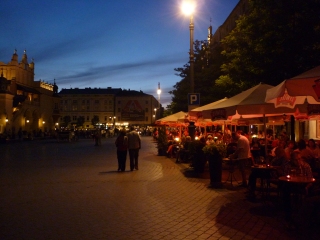 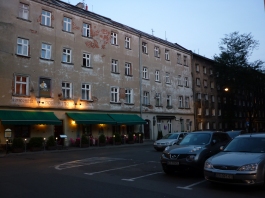 Dinner time – Thanks that was TASTY

Best entrée and salad i’ve had in a looong time

Part of the Jewish cemetary

This place has a lot of art studios/cafes 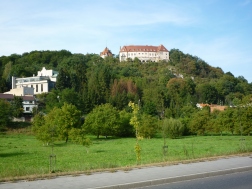 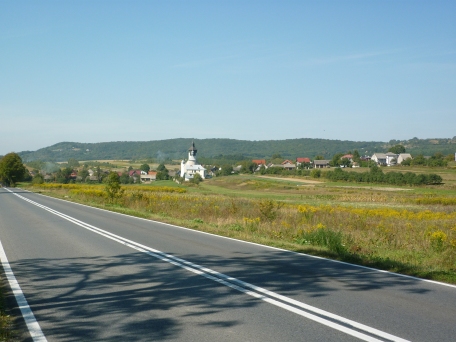 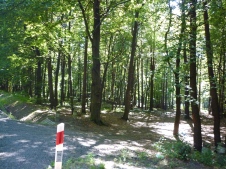 Look what crawled past my tent last night – A lil hedgehog