Thought I went AWOL didn’t you – nope I was having the holiday of my dreams and every day came with unexpected twists and turns as the corners themselves. I’ll break the last few days up into two posts. One with the train ride and walking around Dresden as one and then the other as the Elbe Route as I took the river route for the last few days.

Damn it – no champion Usain Bolt photo at borderline of Germany. So to make up the k’s I pedalled extra to get to Krakow I trained it to the border of Germany – The train ride and the ticket purchase was so much fun I couldn’t stop laughing (NOT). I had some breakfast in the morning and then walked to the train station to see what time the train leaves to go to Berlin as that was my first plan. – I knew there was a direct one as I researched a little on the net on the train stations main website. But The new girl at the counter didn’t seem to think so – she was learning and I couldn’t convey my message properly – So after 1 whole hour of trying to get this ticket it worked out that I had to get on a normal train to Dresden and then I cold get on the train with the bicycle from Dresden to Berlin (after purchasing another ticket). I thought ok – so anyway – after an hour the lady couldn’t tell me what platform it was on – it didn’t say on the ticket and there was 16 platforms. I looked around and couldn’t find tha destination so went back to the information booth and the guy could speak English well BUT he said – I think it’s 14, 15, or 16 – this was fun because each platform required a lift and some walking to find out as each platform was raised and you can’t just cross the tracks obviously– so 2 hours had past now (lucky I went there early) and I finally got there and unhooked all my panniers and got ready to jump on. Some research I did back in Adelaide said that the trains in Poland are crazy – you really need to be on the ball and have youre gear ready to go – well that I did but I wasn’t expecting this hahah – here I was with 4 panniers, handlebar bag,  and another 20ltr bag and my bicycle carrying it all onto the train and everyone was going crazy trying to get a seat – old ladies were pushing ME out of the way  – bloody polski’s hehehe. So i thought stuff this and as i was walking on the train I put my bicycle sidewards (that’ll teach them) so no one could go past me as it was a bit of a jump with all my gear to get on – and i hopped on and ohhhhh no seats – all taken   – WICKED!!….so i was crammed in the corner with all bags and I was nudging aginst 4 people and I felt like Elaine from Seinfeld stuck oin the train and going mental inside my head. So 4 hours past and 3 of those was standing and I almost fell asleep like a standing cow – and then everyone got off and the last hour was bliss when I worked out I could’ve locked my bike tilted upwards and I could’ve sit down on the ground – so that’s the train story.  I knew this from the beginning but when travelling by bicycle – things just take longer – eating, finding things, navigating, communicatoing – shopping etc etc – you just have to factor that in your day and in your brain – things just take twice as long and I just have to keep remembering that and just take it easy with no great expectations of things just flowing along – **end of fact**

The minute I got off the train and walked down to the main part the first little shop I saw was sausages sausages and more sausages of all different types – typical.  and I got off at Dresden and looked up on the net that it wasn’t much difference between Dresden and Berlin in km’s – So I hooked up a hostel (called kangaroo – no affiliation with Australia but they thought Kangaroos can’t go backwards) and walked to hostel and ate some dinner and then met a German guy who was going to walk around the city at night taking pictures – he knew the area so I asked to tag along – it was a good night actually – he knew a lot about all the buildings and we walked around for about 4 hours visiting all the landmarks and taking really nice piccies (free tour guide can’t beat that). Germany has wicked donors (kebabs) they are awesome here and so large.– Dresden is a beautiful city by night.  Marcus (the German dude) is from Munich and his interesting story of the night was that two weeks ago builders were building a place and they found a bomb from WW2 so they had to stop building – evacuatre the city with a certain radius (I think 5-10 km) so within 5 you had to leave your house and within 10km you couldn’t leave the house for a certain time or something – and they had to explode the bomb with dynamite – imagine that. I did notice something funny though – I saw traffic lights for cars and then different ones for bicycles – that’s not strange but what was was that some were pictures of male walking lights and some were female – strange. I wonder if that’s the whole of Germany of just Dresden.

So we walked around as I said and then went to bed pretty late – had a dorm with 4 people – everyone was quiet and I was the one who snored hahahaha. 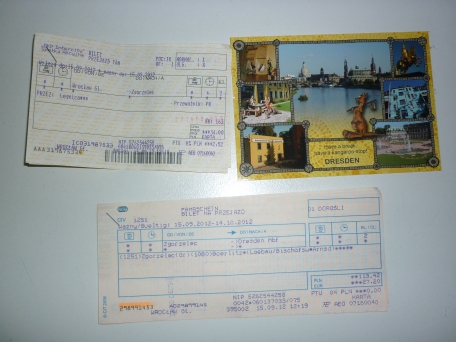 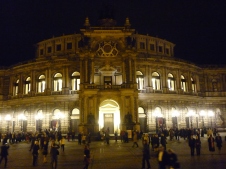 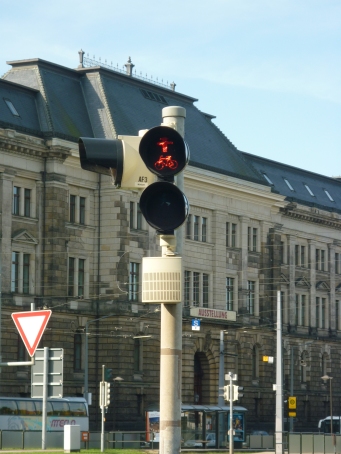 Main church of Dresden – So awesome 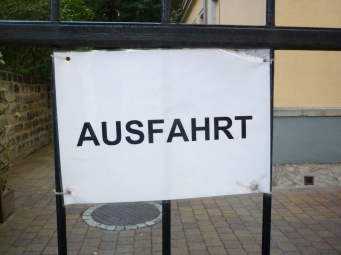 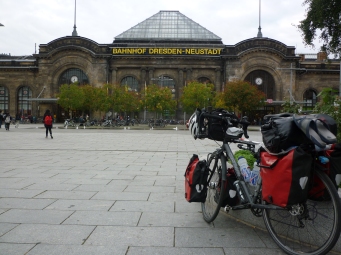