I once heard somewhere that swearing in French is like wiping your butt with silk – I like that saying.

Ok no we got that out the way…..Another short day but this was a hard one – Gradient of approx 6-9% and I climbed up to 700 and then back down to 250 and back up to 700mtrs so it wasn’t high but it was slow going – I was pretty impressed with my average speed considering it was hilly but perhaps because the day was short. I had a coffee at the 40km mark and ended up talking to my wife and cousin for a while and after that it was getting late so I thought I don’t have a real agenda so i’ll find the next campsite and that’ll be it for the day – there’s a great feeling in that. I have an altimeter on my phone and it’s pretty correct because when i got to a little ‘col’ (top of climb) it was only a few mtrs out so that’s nice to know. I know tomorrow will be 1200mtrs as i’ve already looked at the terrain.

Lots up ups and downs today and lots of ‘ooooh’s and aaah’s’ regarding the scenery. My camera really doesn’t do anything justice but there was a lot of stops today just admiring the view and the little villages way up in the nosebleed section.

I had a few coffees today and they ranged from 5 to 7/10 and the last one about 10km from my end point included a lot of world watching for about an hour and half. As my cousin says – France is god’s country hehehe he’s pretty right too – it’s amazing here and I know it gets better.

I plan on doing some more hills as I make my way and maybe hit a little bit of Switzerland and a bit of the alps before i stop this awesome tour.

I’m still a late starter in the mornings and I really should get up earlier because it gives me more time on the bike and that’s the best part – it feels as though the sun is going down too fast every day. I set my alarm for 6:30 and then snooze it a million times and I say ‘tomorrow I am definitely getting up’ – and then I don’t hahaha but tomorrow because I have told you that I am, I am….mark my words – tomorrow I really want to have a long day with many stops and many km’s – won’t be a big km day anyway due to the climbs but just many hours enjoying the sun, sights, people, coffee, beautiful landscapes. I can’t wait. The hammy is getting better everyday and that’s perfect timing considering that it’s all hills from here on pretty much. I’m sleeping great in my tent now and don’t wake up once and am getting between 6-9 hours every night and don’t feel sore from the thermarest mattress I have.

I found a campsite and it’s really nice here in between some big hills and near a river I can hear from my tent.  Sometimes it’s so much nicer to wild camp or camp in a closed down campsite – the hassle of the check in, language barrier, people. Normally my tent’s up and bam I’m ready but tonight was work out internet password that took ages, put a fuse in my electricity box and give the key back, the number I gave the lady didn’t correspond with what I saw, walk back, confirm number, tell her again, go to shower, need coin, go get coin blab la bla on and on – it’s all part of it but sometimes I’d rather just chill in a nice spot – i’m not complaining I swear – all this whilst my dinner was cooking too. Anyway enough complaining, i mean explaining – night all. 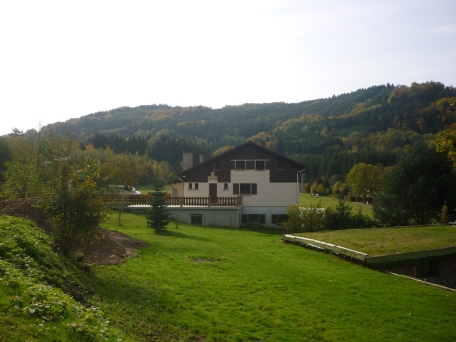 The grass is getting greener and the views more betterererer

Around corner from my campsite – Xonrupt-Longemer 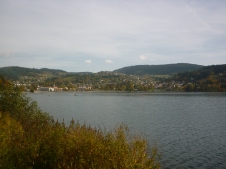 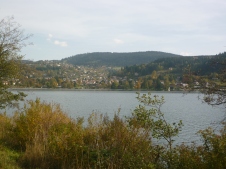 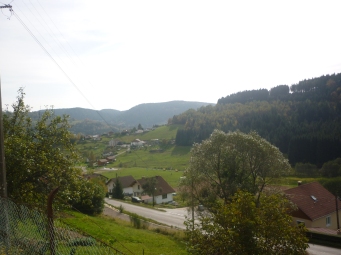 Gerardmer in the distance