Made it to Swiss 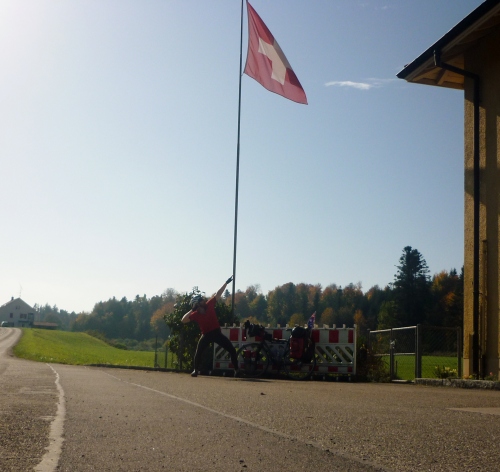 You know I heard once that I should proofread carefully to see if I any words out……..That’s what I heard anyway – pppfft for proofreading I say hehehe.

Enough jokes – onto the experience. Experience it was today – a real feeling of really being in it and living it. The whole day was just great and helped me realise again why I am doing this.

I am feeling all ‘dot pointy’ today so here goes

WHOAH is all I can say about today. The one thing that sticks in my mind today is WHOAH. Hills and more hills – not just hills but MAMMOTH climbs. Two big ones of note which were 12 and 14%. If you want to know what 14% is – I don’t think Adelaide has that steep and cars need second gear to get up them too. When I stop for a break I need to put all my body weight forward to stop myself rolling down. I felt as though I did 5 spin classes today and I almost did actually – probably 4 hours of today’s 5 was climbing and hard climbing – I reached a new level of threshold today and found out what my legs are made of and when you think there’s a downhill coming – nope – just another uphill hah!– plenty and I mean plenty of stops up those hills don’t get me wrong but I wasn’t going to look for the easier option put it that way. It was like putting an exercise bike on the hardest setting for hours on end that’s what. I kept on saying to myself ‘how can anyone be expected to climb this?’ – and then I think again – oh yeah – an idiot like me with a loaded bike who thinks he is all that but was humbled today – hills vs red – HILLS WIN. I am kind of glad that I am not doing any major col’s – not because of the effort required but I found out that I really need the right gearing and I don’t think I have. I  need a triple ring on the front. I only have a double and I really need that smaller ring for the 12% and higher climbs – perhaps on my next adventure – hint hint. Not the climbs of the major alps but the steepness was the same.

Anyway enough complaining…..The scenery was magnificent and worth every bead of sweat and I actually feel so great about completing today. I did stop at a few boulangeries as well for a coffee or three and also had to change currency again – I actually think it’s the fifth currency I have in my bag now – I must get to a bank and change it.

A few people today gave me some ‘Allez Allez’  and ‘Bravo Bravo’ and it really boosts your confidence and by that I mean – keep cycling until their out of sight, then stop and catch your breath ha ha.

Switzerland is magnificent – the green fields, the valleys, the old castles, amazing scenery I tell you and such a privelidge to be seeing it all slowly and taking it in.

I got to the 70km mark and was spent – time to look for camp – Had a bit of a downhill and rode that to the bottom and saw a kebab shop. It was 8pm (Had a late start again) and I thought by the time I setup camp and cook my dinner I’ll be so hungry and this kebab shop looks so appealing PLUS if ask them if there’s any camping around who knows – I might get lucky.

I ordered the biggest plate of kebab meat, chips, and salad I could order and it didn’t even touch the sides – I then asked if anyone knows of any camp sites – one of the customers said (in German) that she has a friend who has a space I pitch a tent – she called the friend and it was no problems. I was in luck because there is no way I am cycling up the next hill I saw with my full stomach – I was prepared to wild camp just up the road where I saw a bit of open space fields and trees which was out of sight – that would’ve been no probs BUT here’s this lovely lady who called her friend and organised it for me.

She said it was only 2km’s so that’s cool – I put that in my gps and thanked her a million times gave the owners a tip and left. 2km she said – I looked up the hill and thought ‘NOT AGAIN’ – this climb was ridiculous – I thought my cranks were going to snap. SO I pedalled 20 minutes or so to get 2km with a full stomach of kebab and chips burping all the way up that hill and I was close but I coudln’t see the house – I then hear a whistle – it’s the farmer who owns the property. He speaks perfect English and I just said I just need a patch of grass and thanked him for the offer. He walked me over to this log cabin that was apart from his house and said he rents it out over summer as a holiday home but I can stay in it for free – WHAT THE!!!! A free cabin with all facilities and a double bed – this day just turned out to be the best. He said that I can stay tomorrow too if I like – I offered him cash but he put his hands behind his back and said to not worry about it….MAN  this place rocks – time to put the kettle on I think hahhahaha – seeya guys – I am going to enjoy this.

PS – Thank you Pierre for making my holiday even more memorable now – you don’t even know me and here you are offering me this awesome cabin out of the blue – thank you for the random kind gesture and you made one human being from Australia so happy.

Reward up the top 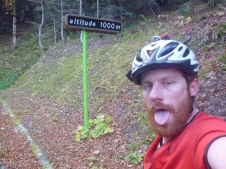 Almost there – The climb up to the Col in Gerardmer 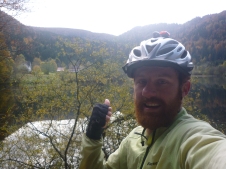 Gerardmer (and the bearded warrior)

Waking up near Gerardmer 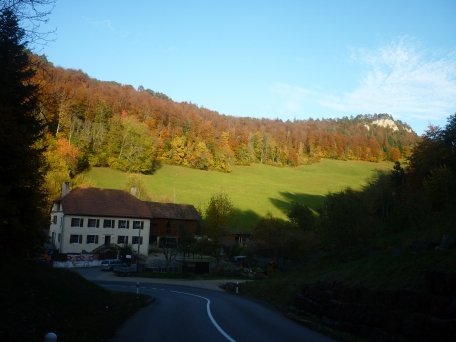 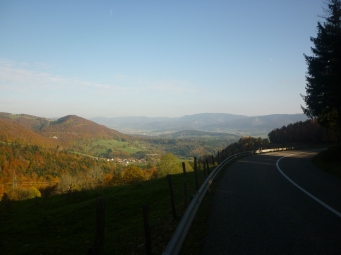 Climbs are well worth it – Switzerland near Neuchatel and Tavannes 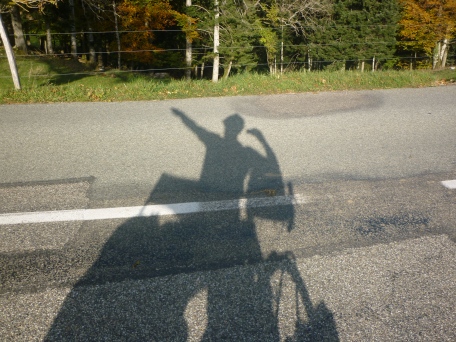 Throwing my shadow right across the sun (with class)

The views are amazing – Switzerland near Neuchatel and Tavannes 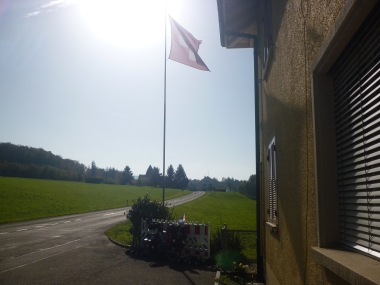 I made it to Switzerland 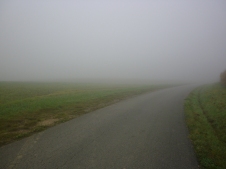 Early morning start – 24degrees today but 2degrees in the morning..strange

Enough corn for every cow in France and Switzerland – Near Mulhouse