I climbed to 1300mtrs today. That’s the highest i’ve been to touring or not. I was supposed to see the major alps from the top but there was fog everywhere. It was pretty dangerous actually because there was a 8km decent and you couldn’t see anything and it was instantly freezing going down there. I had to put my flashers on and i’m glad I did as there was a 5 car pile up half way down that was backing up traffic for so long. I had to put my skins (top and bottoms) on as it was so cold I had frost in my beard hahaha that’s a first – a cold but memorable first.

I tell you one thing – i’d go broke in Switzerland – It’s pretty expensive here – I bought a baguette with cheese and it was $8. It’s only expensive when converting to Aussie dollars I know but it’s pretty up there in regards to food and camping.

Today was hilly as all hell but I enjoyed it all. My legs feel great and i’m feeling muscles appearing where they never have before and I can feel myself  gaining more power and gaining a better technique every day – pity the cycling part of it is coming to an end because the hills are making me fit. When I started this tour I was getting up big hills but puffing and needed a bit to recover at the top but now – it’s still hard going up the big ones and there’s a few rests because my heart is pumping out my chest but at the top I click the gear another one or two down and push through recovering whilst soldiering on – and even getting a few lines of my favvy song out in between breaths he he.

Again – the scenery is amazing and I have to watch the road because you’re looking around amazed at the beauty and enormity of it all.

As I was saying earlier – I decended down that large climb (you see I start the today’s blog at the ending then come back to it later) organised hey hehe. And I arrived in Neuchatel which was a few km’s from my campsite. Neuchatel is a hectic, crazy, beautiful little town nestled in the alps surrounding a large lake. It’s hustle bustle in the city as if it were a major capital but it’s so tightly packed in against the hills. If you want to go anywhere other than the main street, you better have you’re exercise hat on because it’s a huge rise (see pics)

I stopped at maccas and utilised their internet from outside sipping a hot crappy maccas coffee and sorted out the campsite and headed off 6km to Colombier. It sold itself saying it was alongside the large lake, as I arrived huffing and puffing (why are all campsites up bloody hills at the end of EVERY SINGLE DAY!!!) and arrived to pay $26aud for a crappy little spot right up against a main road and no lake to be seen. It’s more of a place to live in a caravan and I found a patch of green grass (harder than what it sounds) and pitched tent, cooked an easy dinner and tried to look for this so called ‘lake’. And you could JUST see it if you peeked through two caravans – nice advertising.

At least they have internet so it was easy to research tomorrows ride and sort an open campground with internet that I can stick around for two days, have a rest, do some reading about Peru and catch up on a few things. Night all.

Another great day – they just keep coming. You know I say a great day and in total they all are but sometimes the mindset changes a few times in one day. It can go from ‘Why the hell did I do this for, this hill can bite me’ – ‘I’m ready to be home now’ – ‘This is the best thing i’ve ever done, I could do this all year’ – ‘I can’t believe i’m doing this, this is awesome’ – ‘Will the hills ever end’ – ‘I can’t believe how nice people are- this holiday rocks’

The mental state changes a lot – sometimes a whole day passes and it’s all great but there are massive highs and real lows sometimes. Some days are just grinding the pedals in rain for days on end and not speaking to anyone and it feels crap and the hills just don’t stop. But then the sun opens and you have a great conversation with someone or something out of the extraordinary happens or the scenery changes and it’s great. My mind definitely became stronger towards riding out the bad times knowing that it doesn’t last forever and just having that thought in the back of my mind helps. Anyway – enough of the deep stuff – onto the boring I did this and that stuff .

When I first entered Switzerland I was wondering why all the cows have bells – after riding through the fog for a few days in a row I now know why derrrrr. You hear them everywhere – it’s a nice sound in your tent when you’re going to sleep and you hear them dinging in the background and meandering around in the magnificent scenery you’ve ridden through all day.

I am not a morning person that’s for sure and packing up a tent and organising packing all the gear in the exact same spot because it fits perfectly right there every time, then setting off and BAM…a one hour climb where you’re not even warmed up yet. I’m hitting my legs trying to wake them up but I take about an hour before i’m all loose (no jokes ppl) and into the rhythm of the day. After that climb though I went through a few massive tunnels which was pretty cool.

I’m happy to be back in France again – back to the awesome patisseries and cheap everything. France – your patisseries have the best chocolate, awesome macaroons, tasty flans and tarts and the bread is pretty wild – thanks – i’m not sure what I like more – the scenery or the patisseries hahaha.

Saw a few castles today way up high in the side of cliffs (how the hell did they do that) and plenty of forests, deer  jumping right in front of me crossing a busy road, really old towns, old war bunkers (there was one that was set up so they could blast people coming around a corner) – I had the works today.

I’m now in my campsite before the sun went down which is a nice change, showered, tent up, converted my mattress to a chair with my attachment I bought…it’s so handy – I wouldn’t do without it when camping. If there’s  no chairs around this thing is the bomb – you can lean back and just kick your feet out and hang back. Tomorrow is a rest day and then I take off to end my touring part of this journey in Besancon France. My cousin will pick me on Saturday hopefully and we spend some time doing some walks and hopefully drive a few routes of the 2013 tour de france roads. I then plan to unload my bike and do a real traditional col climb – hopefully it’s the Alp D’Huez but we’ll see how it all unfolds. It’s sad that it’s all ending but i’m ready for the next chapter and going to enjoy that and then train it to Italy and fly to South America – what an experience.

You know I heard someone say once that all cyclists (and other people who do endurance stuff) are running away from something and that’s why they ride. I’ve thought about that for a while and I really don’t think I am. I think i’m riding this journey with a totally empty mind with no worries, fears, doubts about my life or anything – Perhaps that’s why I think i’m enjoying it so much because I can be in the moment – hmmmm **ponders** 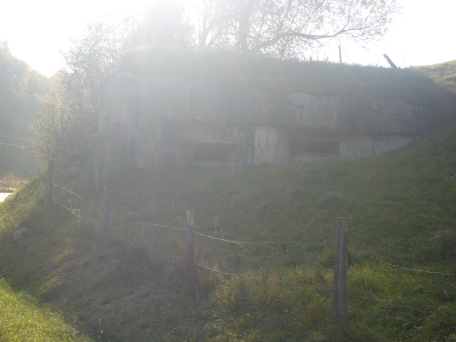 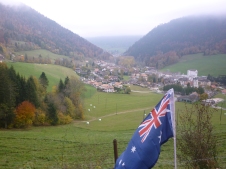 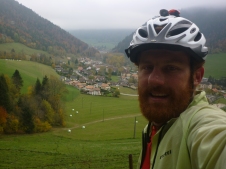 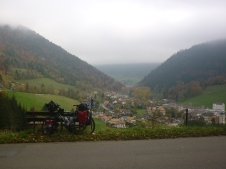 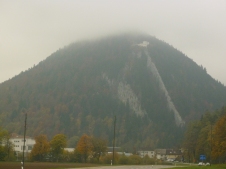 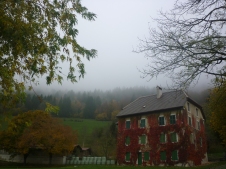 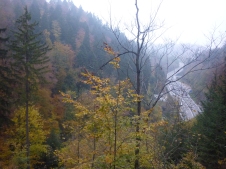 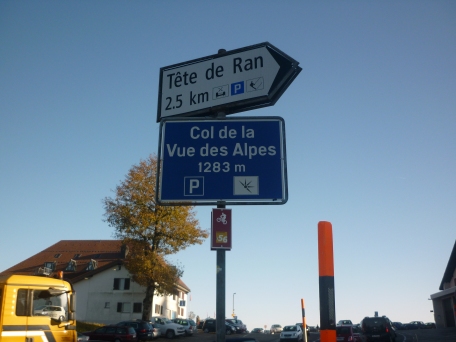 YAY – another Col under the belt 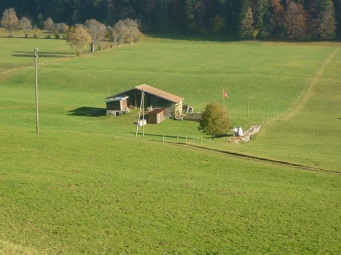 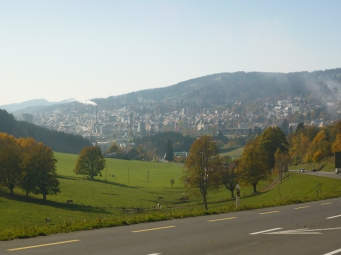 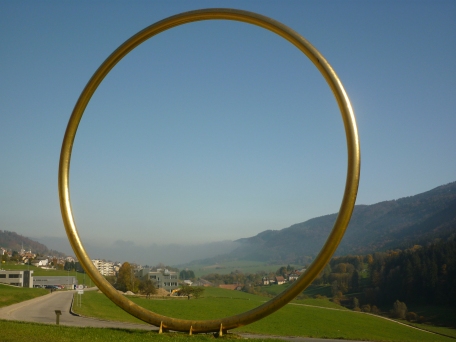 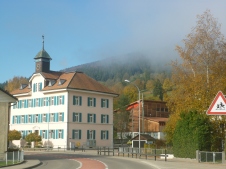 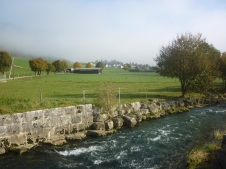 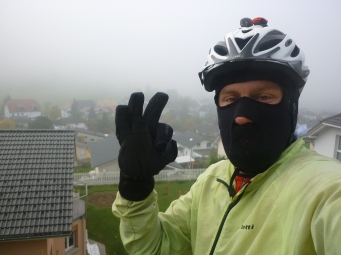 Climbing to 1300 mtrs today all suited up appropriately 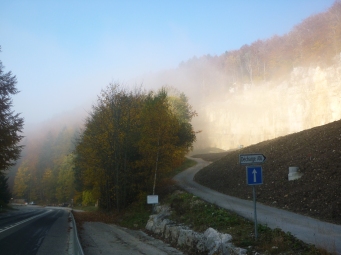 On route to Colombier 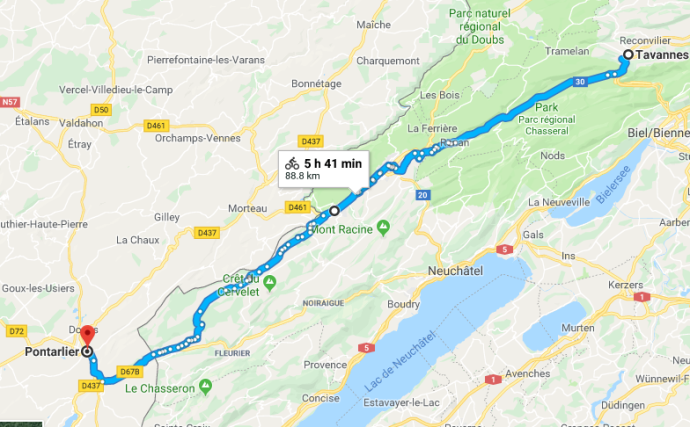